← Back to Previous Menu
Network

Ciências has a strong tradition in IT and it was one of the first sites in Portugal with Internet connectivity. Until 2005, Ciências was the connection hub of the University of Lisbon to the Internet. Since then, the connection of the University of Lisbon to the FCCN (Fundação para o Cálculo Científico Nacional), institution that interconnects all the national Higher Education Institutions was handed over to the Reitoria da Universidade de Lisboa.

Buildings in the campus are interconnected by an optical fiber network at 1 Gbit/s Full-Duplex. The Datacenter backbone uses 10Gbit/s links. A redundant Firewall proxies connections to the Internet. Overall, Ciências uses more than 100 switches, connecting a few thousand network sockets. Access to the wired network is controled, with each socket being individually activated upon request to the IT Department using the Portal de Ciências. Computers can be authenticated by MAC address or using the 802.1x protocol. 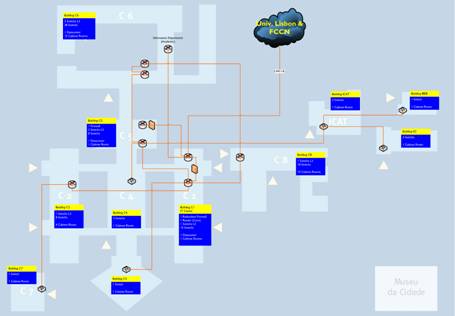 The network is segmented in a large number of Virtual Local Area Networks (VLANs), permiting to separate traffic according to the users and equipment types. The same physical network is used to serve not only traditional data but also the access control to buildings, survailance systems, attendance and Voice Over IP (VoIP) telephone systems. The network is virtually extended to the ex-INETI campus em Telheiras.

Access to some of the services is limited and requires the establishment of a Virtual Private Network (VPN) in advance.